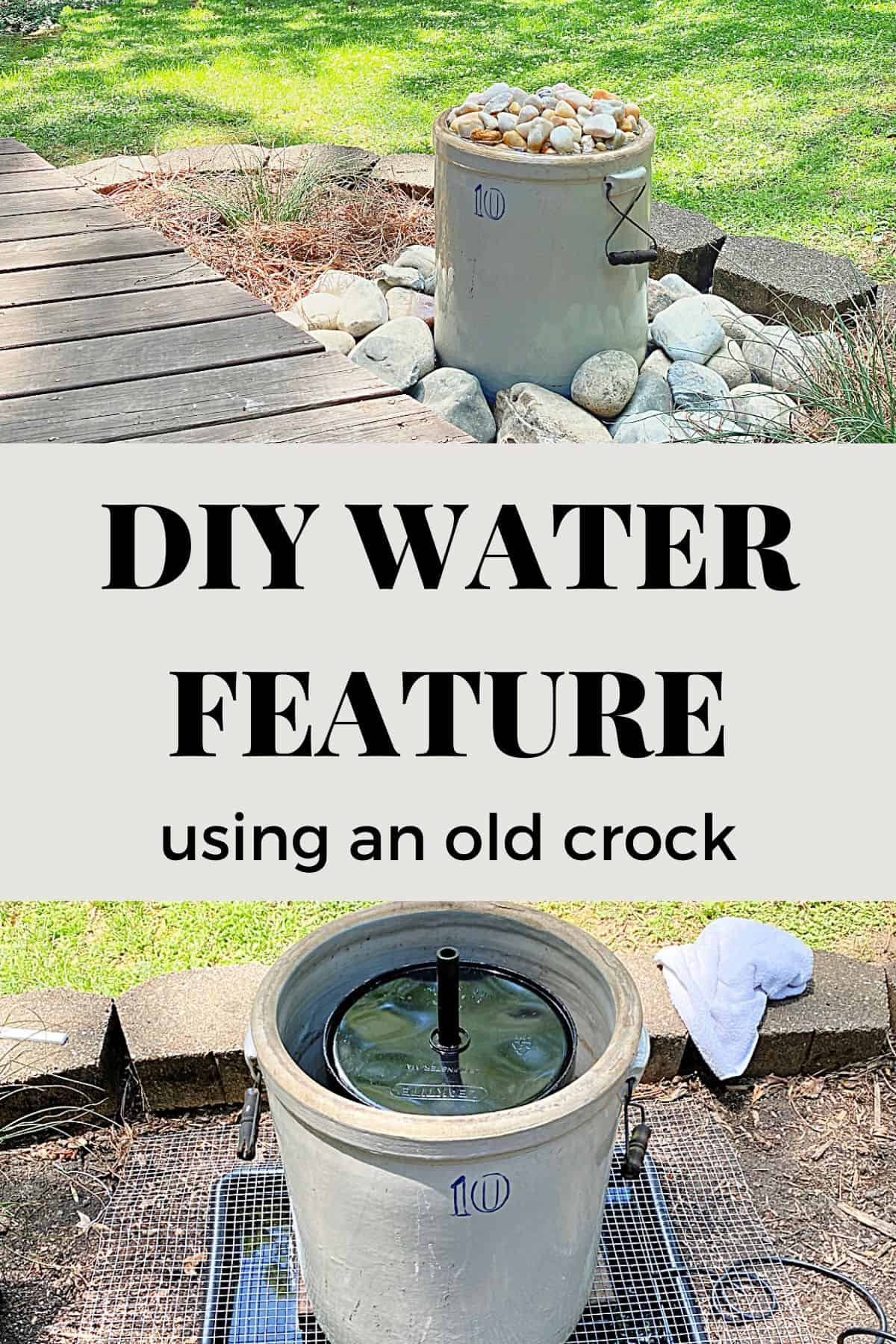 How to make a DIY water feature from an old crock for a backyard deck.

I have a little flowerbed that's next to our backyard deck that's been giving me issues.

We've lived in our cottage for 5 years and every summer I try to plant something in the flowerbed but it never ends up well.

Actually, trying to grow anything in our backyard is hard. We have so many mature trees and they block the sun from getting in.

It's good for keeping the backyard "cooler" in the summer but not great for my plants.

Anyway, I wanted to try something different this year. I've been wanting a fountain in our backyard since we moved in 5 years ago but I was afraid it would be costly and complicated.

From the get-go I knew I wanted a disappearing water fountain, meaning that the water looks like it's just disappearing into the ground, so I finally made up my mind to do it.

What is a disappearing fountain?

It's just a fountain with water that recirculates out of the fountain liner, up into the crock (or vessel) and back into the liner.

This creates a subtle but soothing sound of running water.

As usual, Roger, a.k.a. Mr. Skeptical, had some doubts but I was going to prove him wrong no matter how long it took me.

It was a bit more work than I thought it would be but it was definitely worth the effort.

I put my fountain in a tight space so I took plenty of measurements before I went out to buy supplies.

When I went to the home improvement store I thought I would have to use a storage bin for the fountain liner but I was able to find one that was the perfect size for our space.

My original plan was to use a large flower pot for my fountain so I bought one of those, too.

After I started searching the garage for my other building supplies and tools though, I came across an old crock that's been sitting in the basement for 5 years.

I thought it would be a unique way to reuse it so I decided to return the pot and use the crock.

Ok, so with all of my supplies and tools, and the decision made for the fountain vessel, I set to work building my water feature.

I really thought I could do it in a weekend but it took me about 5 days, on and off, to build it.

The first thing I did was to clean out my sad little flowerbed.

I removed the pinestraw, dug up the plants and pulled out the weeds.

With the flowerbed prepped I placed the liner in the bed to make sure it fit.

The liner was a perfect fit so I dug a hole around it.

The goal was to dig it deep enough so that the lip of the liner sat just above the ground.

Once the hole was deep enough I used a heavy board to tamp down the dirt to give the liner a good, solid foundation.

As I was tamping the dirt I kept checking the liner to make it level.

This is a pretty important step to do so that your fountain will flow evenly on all sides.

After all the work trying to level the liner it still wasn't as level as it should have been. A few plastic shims saved the day!

More on that later on.

Once I had the liner as level as I could I filled in the sides and tamped down the dirt.

With the liner ready to go I started working on the crock.

Preparing a pot for your fountain

Most flower pots already have a drainage hole in them so if that's what you use for a project like this, you'll be able to skip this step.

I used an old crock that didn't have a drainage hole so I had to make one.

The hole in the bottom was for the clear tubing that I connected to the pump to carry the water up into the crock.

This was by far the scariest step for me. I half expected the crock to crack when I drilled into it and ruin the whole thing.

Luckily it all went smoothly.

So, to drill the hole I turned the crock upside down and marked the middle.

I grabbed my drill, a newly purchased diamond drill bit and a cup of water to start the process (when drilling pottery or stone you always want the surface to be wet).

I took a deep breath and started drilling.

To drill the hole I had to start with the drill bit on its side, otherwise it would have skipped around on the surface.

Once it started to "grab" I slowly moved the bit so that the tip of the bit was on the surface of the pot.

In just a few minutes I was done.

It actually turned out to be a pretty easy process, and my crock survived.

With the crock all prepped it was time to prepare the bucket for the inside of the crock.

I decided to use a large plastic bucket as filler for the crock so that I didn't have to put stone in the whole thing, saving me some money and keeping the weight down.

To prep the bucket I needed to drill a hole in the bottom so that the PVC pipe could fit through.

I used a step bit to get the job done.

After I drilled the hole in the bottom, I randomly drilled holes in the sides so that the water could flow freely throughout.

Then I used black spray paint on the bottom half of the bucket and part of the PVC pipe, just to make it look better if it was visible.

Hooking up the fountain pump

While the paint dried I worked on the fountain pump.

I used the ½" adapter that came with the fountain pump and connected the flexible tubing to it.

Then I connected the PVC pipe to the flexible tubing. The tubing was very snug in the PVC so I didn't use any connectors.

Next I filled the liner with water and placed some old bricks in it to hold the weight of the crock.

I needed screening to lay over the liner, so that I could put my rocks on top, so I cut some galvanized wire mesh that we had leftover from another project.

After the mesh was cut and fitted I ran a quick test of my setup.

I placed the crock on the bricks, put the bucket in with the tubing and pipe and added more water.

It worked! The water ran out the hole in the crock pretty quickly because it wasn't watertight, but the fountain worked.

To make the crock watertight I had to use some Water Weld, which is a two-part epoxy putty, around the flexible tubing that is attached to the pump.

For my first attempt at making the crock water tight I used Lexel, which is a sealant. Unfortunately it never set up.

For the second attempt I used the Water Weld. I placed it around the tubing and left it to dry for 24 hours.

It worked and sealed the tubing in the hole in the bottom of the crock.

Finishing up the fountain

With the crock watertight I placed it on the bricks, connected the tubing to the pump and started to clean the rocks that would be used to fill the crock.

It was a pain to clean them but it was an important step so that the dirt and sand didn't clog the pump.

After I put the little rocks in the crock I cleaned the bigger rocks that would go around the crock and put them in place.

I filled the liner and the crock with water and turned the fountain on.

It didn't take long to see that the crock wasn't level. It looked level to my eye but all of the water only ran down one side.

This is where the composite shims come in to play.

I just strategically placed them under the crock and put the rocks over them so they can't be seen.

It took a few tries to get the water flowing on all sides but I finally got there.

With the fountain done I planted two grasses in the flowerbed and put down new pinestraw (where I hid the outdoor extension cord).

This project turned out to be a bit more involved than I had thought going in but it was worth it.

I love how it turned out!

Now excuse me while I sit back and enjoy my originally unique homemade water fountain, while I sip on sweet tea and gloat in front of Mr. Skeptical.

A note on filling the fountain

I'm finding that I need to fill the fountain once or twice a week when we are having very hot, dry weather. I just fill my watering can up and fill the liner and the crock.

The fountain pump I bought has an automatic shut off if the water gets too low so I'm not too worried about getting it filled right away if the water level drops.