Painting mini pumpkins on the cheap using different kinds of paint and some twine and glue.

I've already put my Fall decorations out and shown you my fall house tour, but I'm still having some fun painting mini pumpkins. I have a couple of traditional orange ones but I'm really liking the white ones this year so I thought it would be fun to take some cheap mini orange pumpkins and give them a makeover. 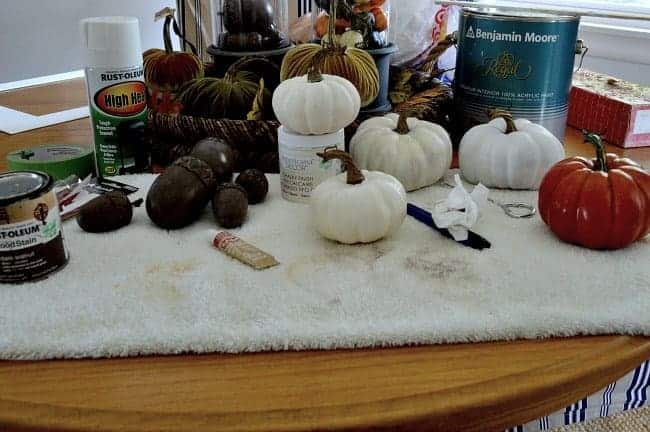 I used several different methods for their transformations and I thought that I would share the results. Each makeover pumpkin is posing between two real (all natural) baby boo pumpkins. 🙂

The first one I did was plastic and I chose to use the Rustoleum high heat spray paint, in white, that I used on the guest bedroom lights. I taped off the stem and sprayed 2 coats.

After the paint was dry I used some gold Rub 'n Buff on the stem. The high heat spray paint has a matte finish, similar to a real pumpkin, and I really liked it. 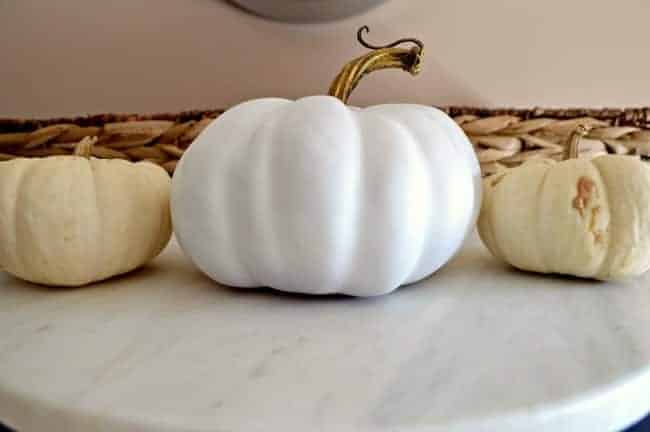 On another plastic pumpkin, I used the same spray paint and Rub 'n Buff but I also rubbed some dark walnut stain on it after the paint was dry. I like this one the most because the stain gives the pumpkin some dimension. 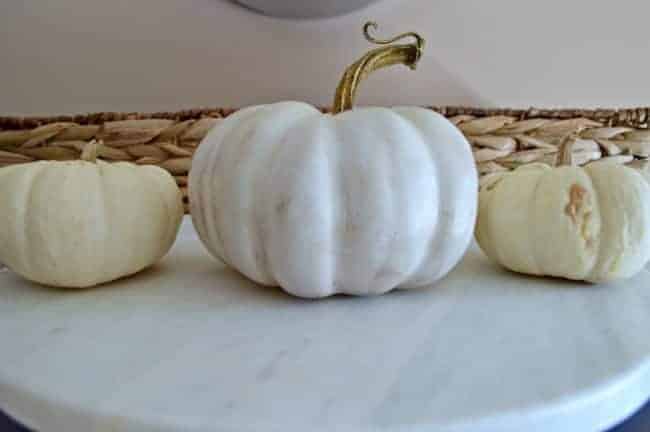 The next pumpkin was painted with chalk paint in an off white.

This pumpkin was made with styrofoam so the orange color mixed in with the paint on the first coat. It ended up taking 3 coats total to cover the orange. To finish it off I used my fave dark walnut stain to touch up the stem a bit. 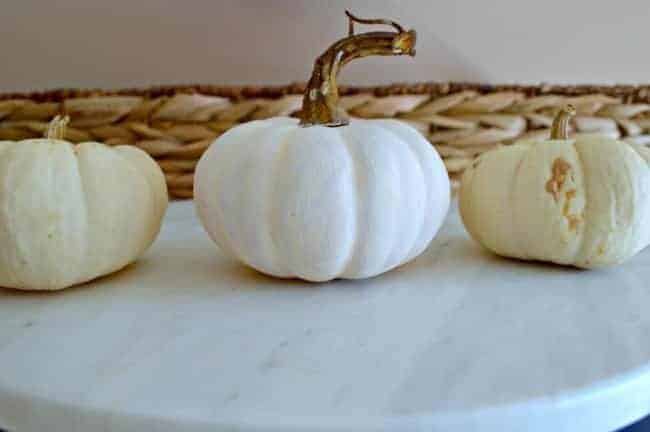 I tried some regular latex paint on my next pumpkin. Like the one before, the orange ran into the white on the first coat. I also did 3 coats and stain on the stem. 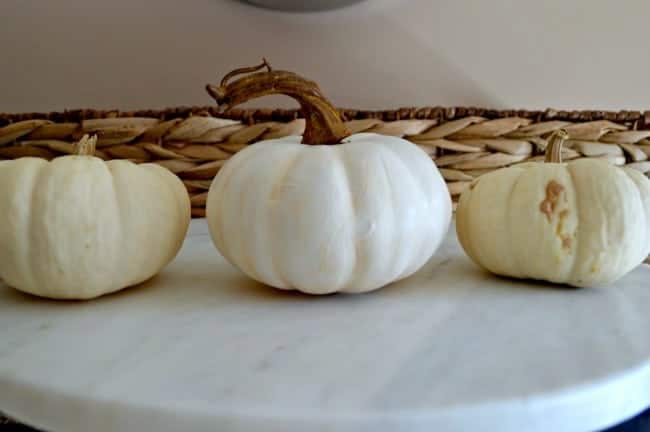 The last pumpkin I used twine, left over from my stool makeover, and hot glue. I simply started at the bottom of the pumpkin with a little glue and wrapped the twine around, glueing along the way.

It ended up looking like an apple because you lose the ridges that are traditionally a part of a pumpkin, but I still liked it. 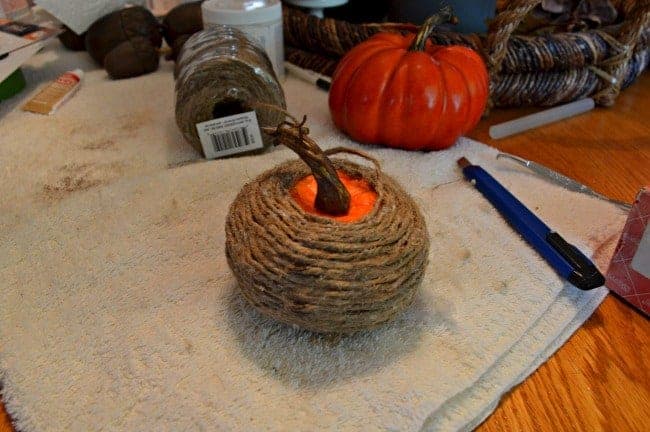 I guess if I had to choose, I would say that I like the spray painted one with stain. The twine wrapped pumpkin and the white spray painted mini were next on the list.

I'm not crazy about the look of the hand painted pumpkins, and the fact that they took 3 coats. Using spray paint was definitely quicker and easier. 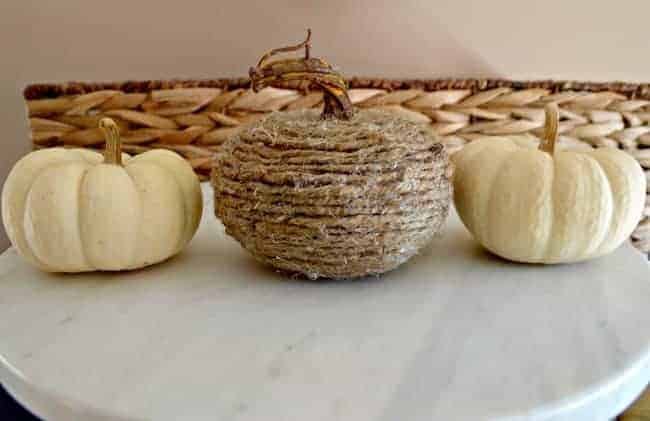 After they were all done they went into my big glass hurricane with a few wooden acorns. Love them... 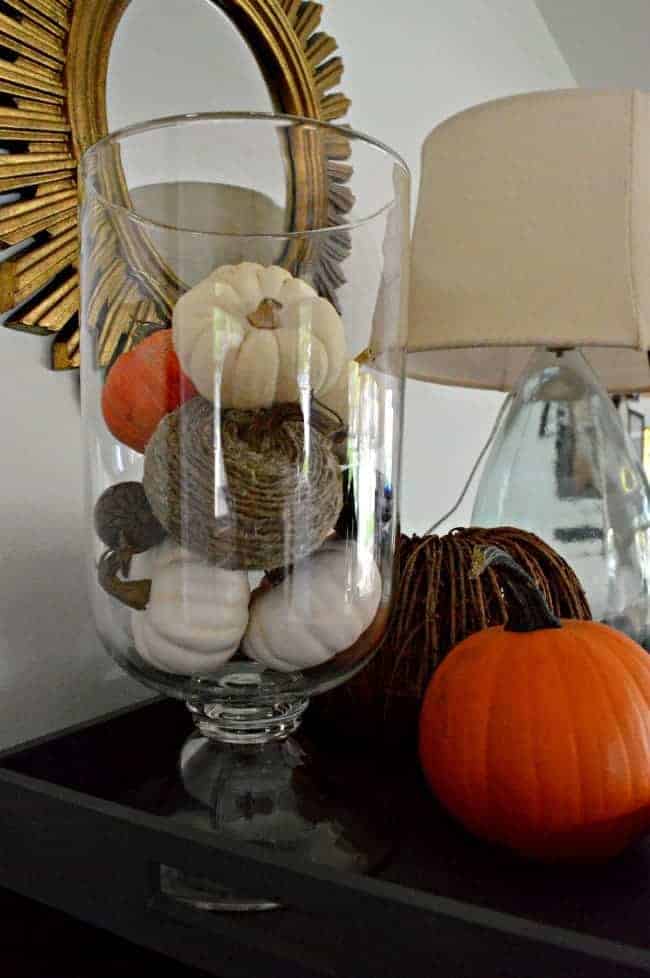 Would you give a pumpkin a makeover or do you think they look beautiful just the way they are? 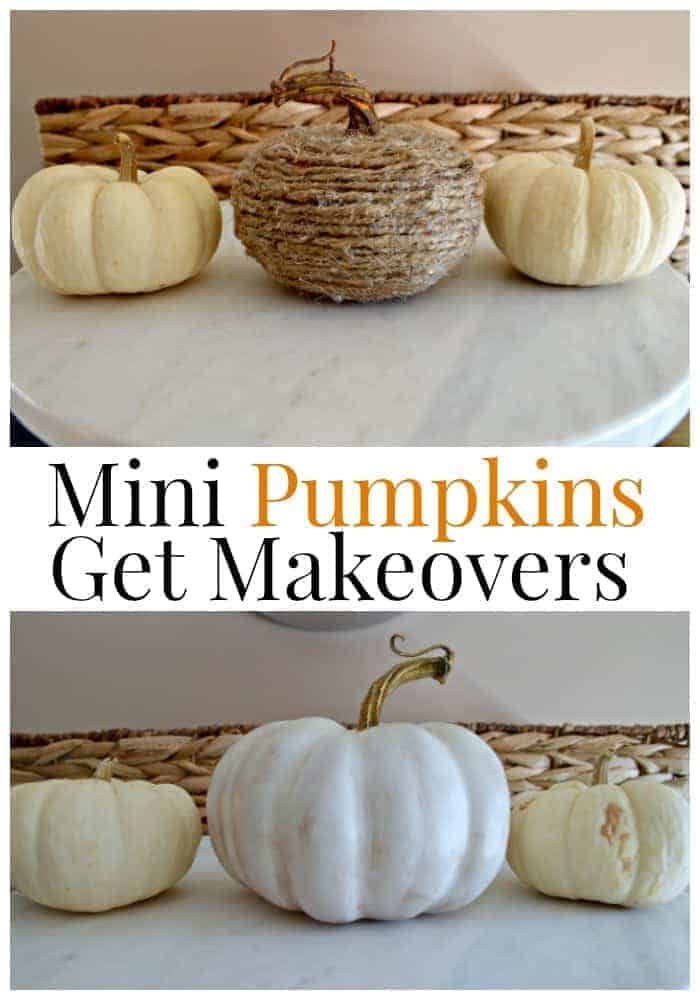