Last week after I shared the outcome of my entryway bench mishaps, I ended up getting some requests asking for a post with details on how I did it, so I put together this tutorial on how to upholster a bench. This is a long one so grab a cup of coffee and a comfy chair.

I won't go into all of the drama again but if you want to read about it you can go here and here. I will, however, show you where we started...with a painted white wooden bench from LLBean. 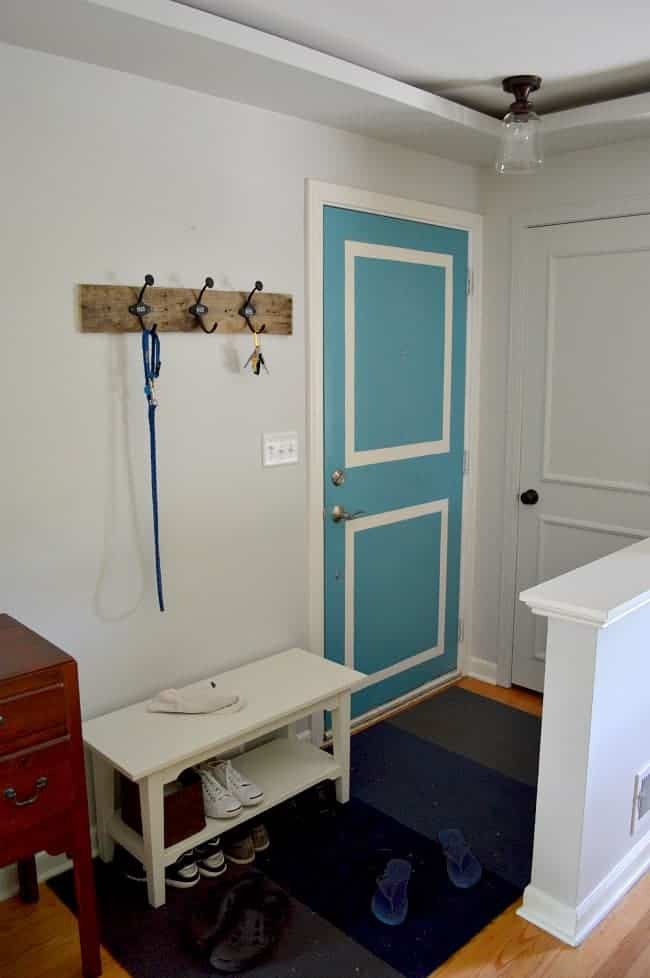 All I wanted to do was change the color, so I painted it black using oil based paint. 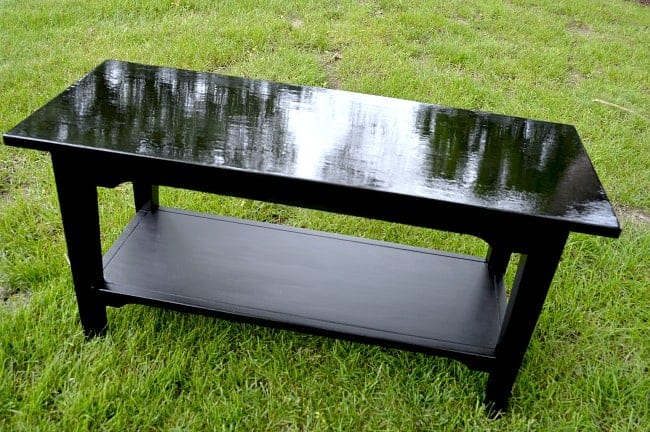 I was experimenting with a different paint and a different sheen so the last paint application was to the top only. I didn't like the sheen at all so I decided to cover the top with a cushion. I was just going to make a cushion to place on the bench but I didn't want to worry about it moving around, so I decided to upholster it and attach it right to the bench.

My supplies used for this project were:

I started by measuring and using the serrated knife to cut the foam to the exact size of the top of the bench. I had already had it cut to the right length at the store so I only had to make 1 cut for the width. 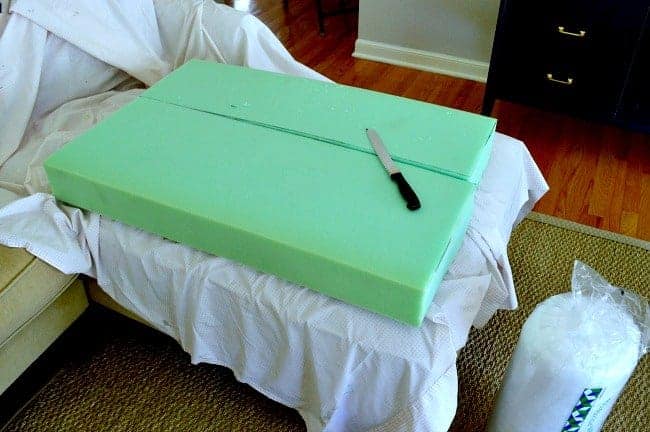 Next I laid the batting on the table (I doubled it just to be safe) and then I laid the foam in the middle of the batting and the bench on top of the foam. 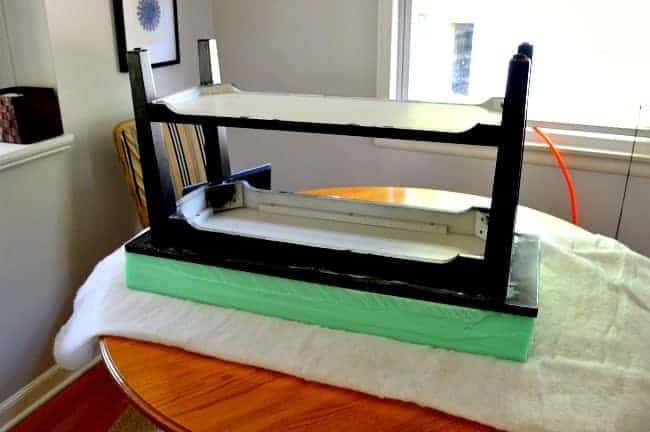 I trimmed some of the batting but made sure to leave enough to go around the foam to the bottom of the bench seat.  Now I'm ready to staple. I'm sure that we could have used our regular stapler but we had all of the hoses hooked up to the compressor for another project, so we just used the pneumatic stapler. Next, starting with the long side, and making sure that the batting was perfectly flat with no wrinkles, I pulled the batting taut and stapled to the bottom of the bench seat. First in the center and then moving to each end. 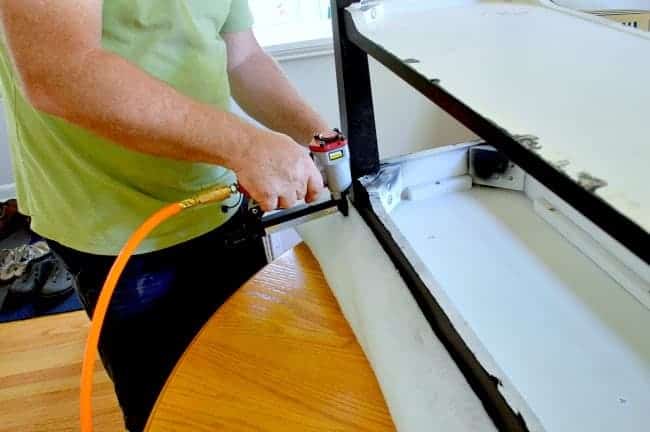 Mr. C² is my model, as usual, but I did this project. I am the photographer in the family, unless we want to only see the top of my head and the ceiling. 😉

You want to make sure you are always checking it and pulling the batting taut but not too tight. I stapled the rest of the side, leaving the corners until the end, and moved onto the opposite side then to each end. After all 4 sides were done I trimmed off all of the excess batting and it was time to do the corners. I don't do anything fancy, I just pull in all the batting so it's taut and laying neatly and then I staple it. 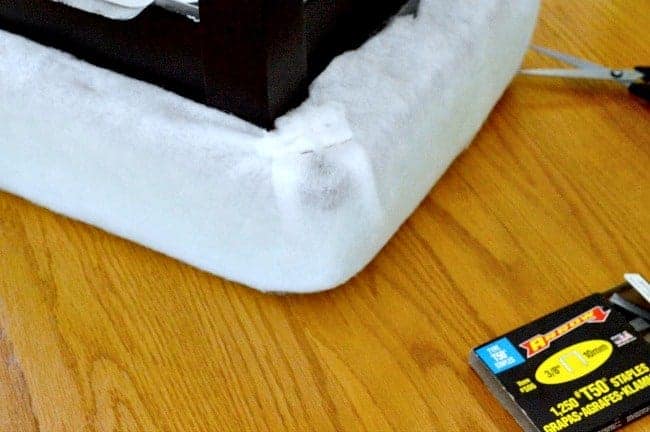 Just make a quick check of your bench to be sure there aren't any bumps or creases in the batting. 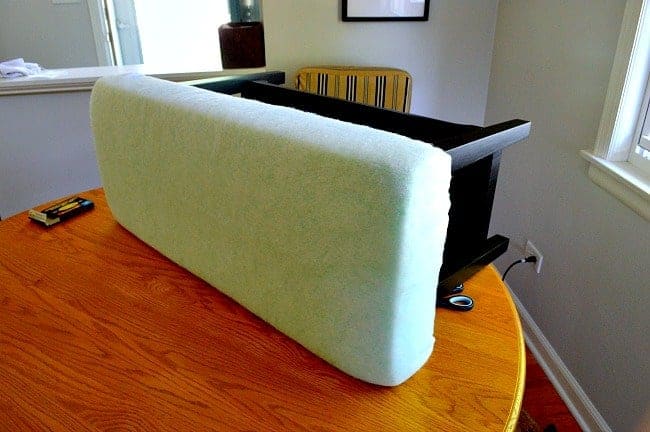 Next it was time for the fabric following the same steps with the fabric that I did with the batting. I ended up using the fabric that I had left over from my chair makeover. I was going to try to find something else but I just wanted this project done and didn't want to spend time searching for fabric, it can always be changed if the right one comes along. 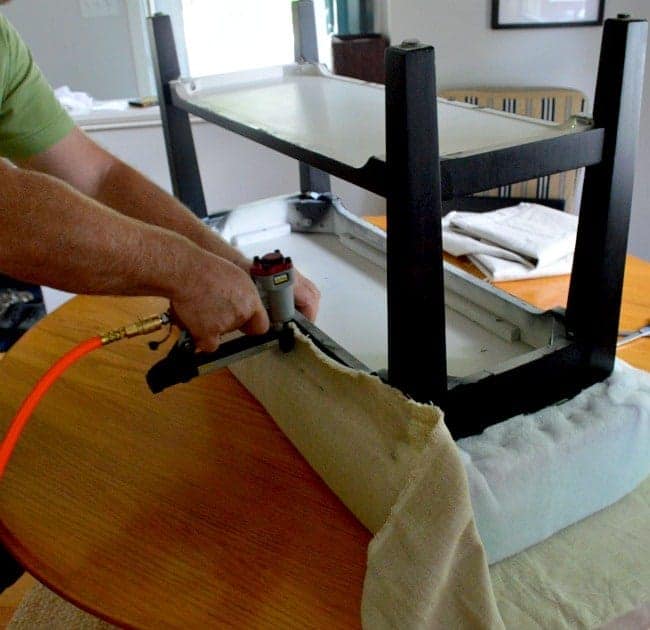 Make sure your fabric is straight and has no wrinkles. If you have stripes or a pattern, you want to make sure you don't skip this step. I pulled the fabric taut and began stapling the long side, starting in the middle again. I worked my way around the bench checking for wrinkles occasionally and leaving the corners undone. Next I trimmed all the excess fabric.

To do the corners, I could have just gathered the fabric in the corner until it laid the way I wanted and then stapled it (like I did with the batting) but I wanted to try something different. All I did was to fold the corners over in a sort of 45 degree angle, making sure everything was laying flat, and then I stapled. Unfortunately, I don't have any pictures of this process. Mr. C² and I argued about what looked best and picture-taking was forgotten. It really was simple though and this is how it looked. 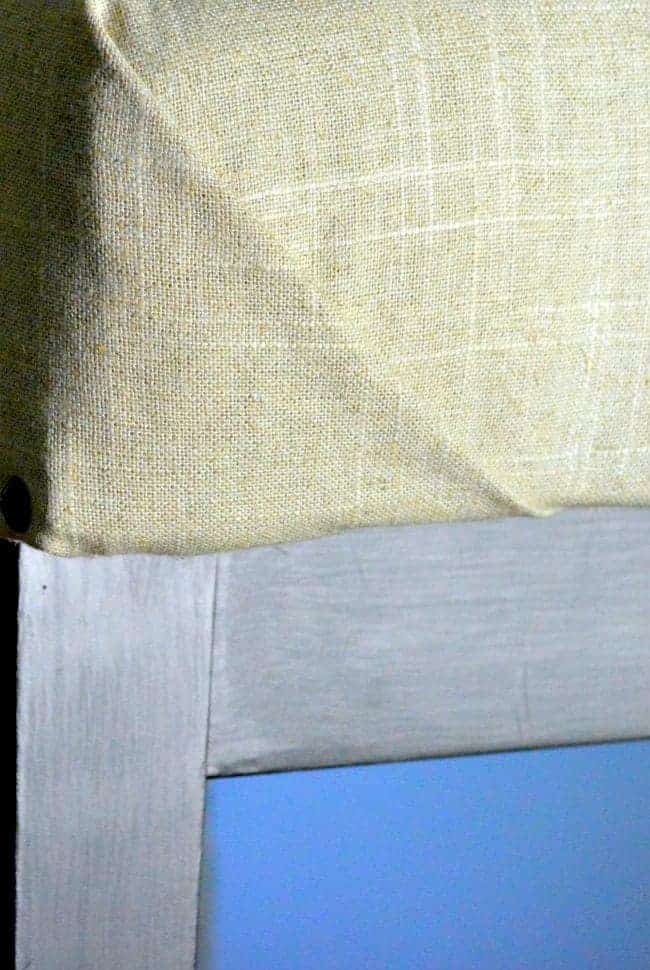 I did each corner so the angles where on the ends (short sides) of the bench and not on the long sides of the bench.

You can see the bronze upholstery tacks that I had started to put in. I wanted to add a little interest to the bench, so I thought I would add some tacks to each corner. This was really easy to do too. I simply hammered them into the side of the bench seat, right into the wood (not the cushion). You can use pliers to hold the tacks, but I ended up holding it with my fingers. 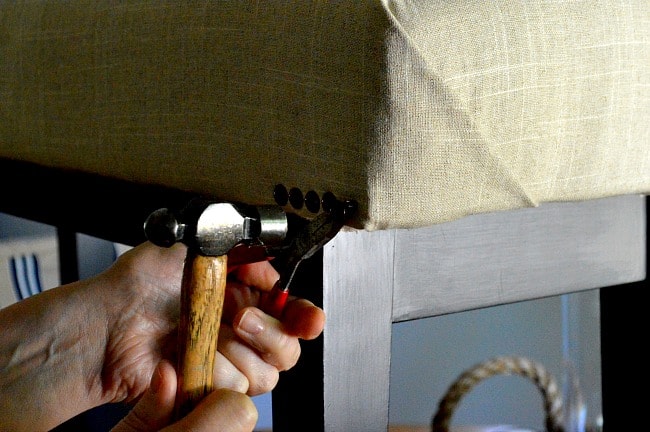 Yes, they are my hands making a rare appearance. I had to set the camera up on the tripod and focus it so all Mr. C² had to do was to push the button. He grumbled the whole time he pushed the button too. 😉

I started out trying to measure the tacks to space them out evenly, but it just didn't work out so I just eyeballed it. I had to pull some out a couple of times with a screwdriver, but there was no damage done to the fabric. I used 5 upholstery tacks on each corner for a total of 40 tacks. 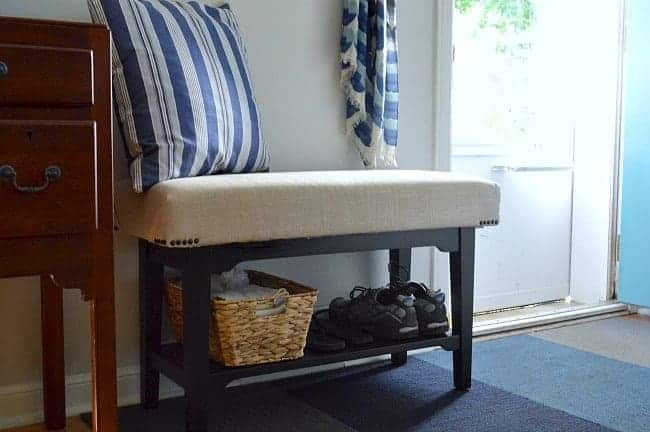 That's it...it's done and I'm glad that I stuck with it and finished it the right way. I'm really happy with the way it looks, which is good because I won't be touching this piece again...ever! 🙂 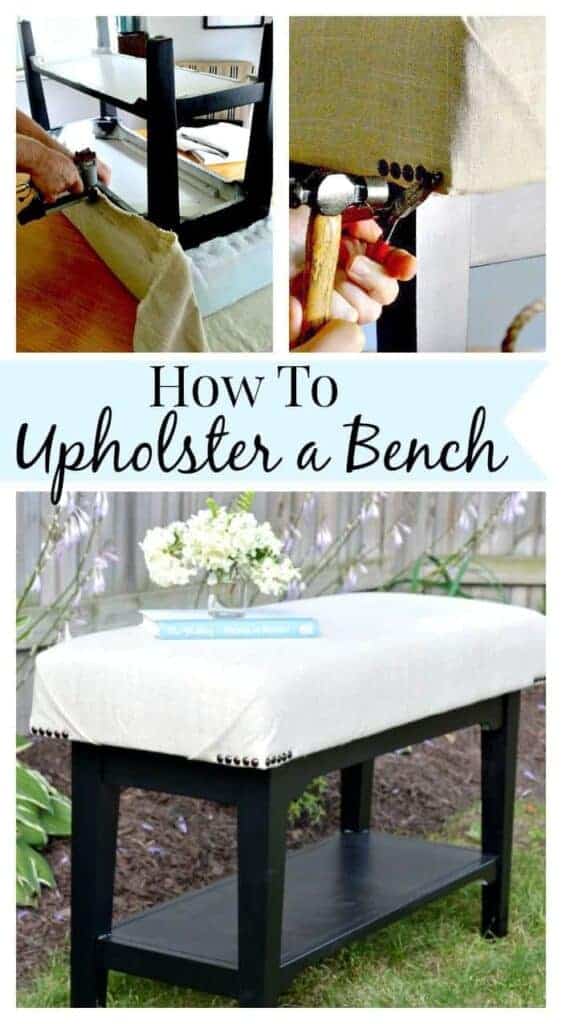 Have you ever done a project and the result was nothing like you planned? What kinds of projects are you working on now? I'm back in the guest bedroom.

Here's hoping you have a great week.